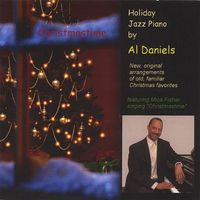 From the recording Christmastime

"O Tannenbaum" (German: [oː ˈtanənbaʊm]; "O fir tree", English: O Christmas Tree) is a German Christmas song. Based on a traditional folk song which was unrelated to Christmas, it became associated with the traditional Christmas tree by the middle of the 19th century and sung as a Christmas carol.

This jazzy piano rendition by Al Daniels has received the most plays on Pandora... Several Million since 2007.